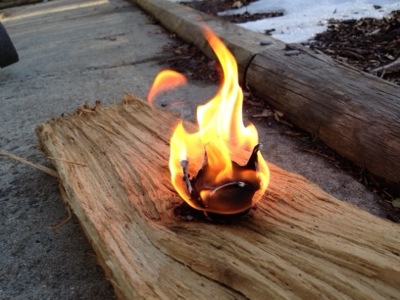 Whether it’s a campfire, fireplace, backyard chimenea/fire pit, a camp stove, or some other need for a sustained flame, they all share a common requirement: you gotta get it lit! To date, I had simply walked into the store and grabbed a box full of manufactured fire starters off the shelf. At about $7-$10 per box of 10-15 starters, they can range in cost and style, and also vary as much in effectiveness. But the biggest issue for me was having to rely on someone else or some uncontrollable source for this near-necessity (I say “near” because I’m having trouble calling these a true necessity since there are many ways to get a fire going–using some sort of starter is somewhere between a necessity and a luxury or time saver).

It all started when a friend showed up at our family camp out with these crude-looking odd-shaped things that she was super excited to have–and that the great camping master (that’s me, apparently) didn’t have! “I made these from egg cartons, dryer lint, and wax” she said with just a touch of sarcasm. I thought she must have a head full of dryer lint to have wasted her time on these things, but I must admit they worked pretty darn well. That was last fall and I’ve been itching to try it out for myself. 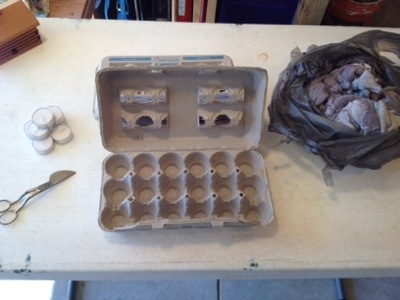 The ingredients are simple:

That’s it; three things. The egg carton is easy to find. My local stores for some reason only carry brown eggs in cardboard cartons, so we got to experience the zero difference between white and brown eggs. To collect dryer lint, just put a grocery bag somewhere near your dryer and, instead of throwing away lint collected on the trap every load of laundry, throw it in the bag. Since lint is flammable (hence its use in these fire starters), be sure to store it somewhere safe. For the wax, I used tea lights that have been siting around the house for years. I’ve seen others use canning wax while some folks cut up old candles. As far as I know, any wax will do.

A note on the dryer lint and wax…

If you’re going to use these fire starters at a campsite (especially in the backcountry), pay attention to scents that may be present. For example, dryer lint will likely take on the smell of your detergent. If your lint is like mine, it may also have bits of others things in it like paper, candy, and God knows what else that went through the wash! All of these things will introduce an odor to the flame which may attract wildlife (namely bears). The same goes for the wax: if at all possible, use unscented wax. Since the fire starter will likely be consumed by the time you use the flame for cooking (if that’s what you’re doing with it), contaminating your food shouldn’t be a worry. I’m just thinking about animals. In any case, even if you think they are totally scent-free, these should be stored in your “stink bag” at the campsite and stored appropriately.

For my first batch (the pictures you see here), I used only four spaces in the egg carton. I wasn’t sure how they were going to work and I didn’t want to waste a whole carton and ingredients. For that reason, you will see only four spaces filled. I intend to make an entire carton in the future to maximize efficiency. 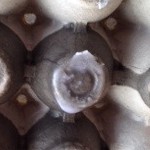 Prepare your work area by placing newspaper on the table surface or use a surface that’s immune to getting some hot wax on it. You’ll be working with melted wax and there is the potential to spill. Also, as I learned in my first go-round, the wax will saturate and leak through the cardboard egg carton. This is good for the final product, don’t worry. But it will make a little mess underneath the carton. 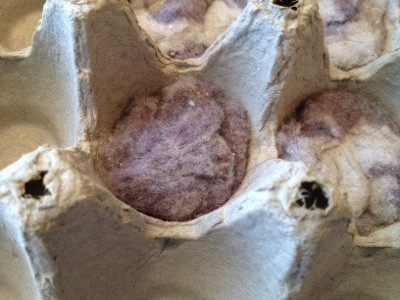 Begin making your fire starters by pinching off small amounts of dryer lint and placing it in an egg divot in the carton.  I pressed it in just slightly to compact it a tiny bit and stopped at the bottom of the “U” divider. This was a total guess at how much to add and I was happy with the end result, but I think this is definitely a spot to vary the method for fine-tuning the results. My assumption is that adding my lint will yield a longer burn time since this is the primary fuel for the starter. Try to pick any impurities out of the lint (i.e. paper, hair, trash, etc). 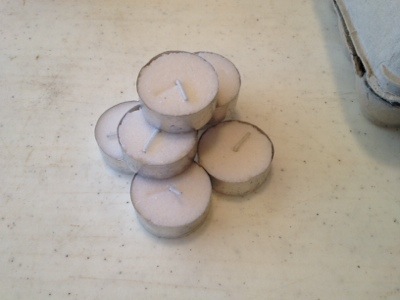 Next, once you’ve filled all the carton spots with lint, it’s time to melt your wax. Get out your pot and fill it with enough water to rise up about 1/3 of the jar when you place it inside the pot. Too much water will make the jar want to float and may make it unstable (which will result in your wax spilling out when it flips over…not good). As for how much wax, I don’t have an exact measurement. I took a guess at 1.5 tea lights per carton spot and I think I got close. If anything, it’s better to have too much so you don’t skimp on the amount of wax you pour into each fire starter. I’ll use 2 tea lights per spot next time. The tea lights I used had a metal base and a wick with a small metal disc on the bottom, all of which I removed to have just a little wax puck. Pure wax is best to have, but I think wick material would be ok to leave in since it’s flammable (as long as it doesn’t have a metal base like mine did), if you’re using old candles. 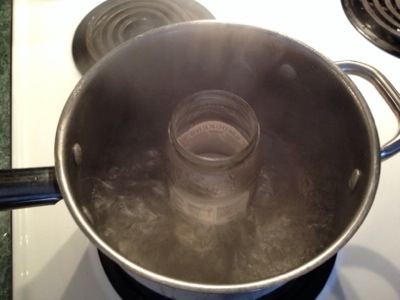 The “double boiler” may sound complicated, but it’s very easy to assemble and use. The purpose of it is to use the heat of boiling water without letting the water touch the material. Simply place the wax into your jar, place the jar in the center of the pot, adjust the water level in the pot to rise up to about 1/3 of the jar (don’t put water in the jar), and bring it to a boil on a stove. It should be noted that I watched my pot and it did in fact boil!!! Stay with your pot and keep an eye on the jar. It will rattle and move around as the water boils. Just make sure it doesn’t flip over. Keep a hot mitt ready for any quick reactions you think you’ll make instead of sticking your bare hand into a boiling pot of water!

Remember your high school science class safety rules here!!!
What, you were too cool to learn those important face-saving rules that will keep you from melting your eye balls? Well, let this nerd who paid attention remind you…
DO NOT put your face directly above the boiling concoction. There’s nothing going on that you can’t see from the side, away from the rising steam. And if you absolutely must smell what’s cooking, use your hand to waft the steam to your face which is off to the side and not directly above the boiling pot! 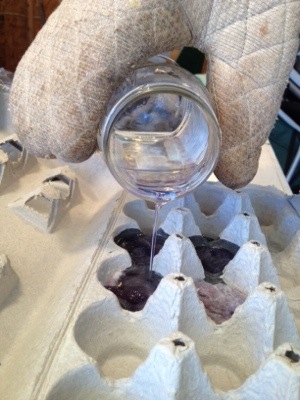 Be patient and let the wax melt thoroughly. Using your hot mitt, grasp the top of the jar and give it a gentle twirling motion to check the status of the wax melting. When all the chunks are melted, you’re done and can turn off the heat. Leave the pot on the stove and transport the hot jar of melted wax to your project area (please tell me you remembered to use your hot mitts). Pour the wax slowly into all of the spots that you filled with lint. You might want to have something handy to push the lint down if it floats up when the wax pours in. You want the lint to be totally covered in wax in order for it to make a prolonged burn (as opposed to burning out quickly). The cardboard egg carton is going to soak up (and leak) some of the wax, so take your time and go back over the spots that you already poured as the wax level will probably go down a little bit after you move on to the next one.

In case you’re wondering, you should expect about 5 minutes before the wax starts cooling too much and hardening. Don’t waste time getting it poured into the egg carton, but don’t rush either. 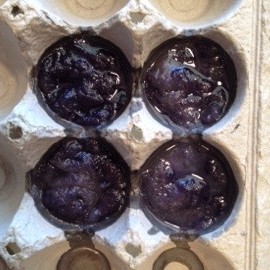 If you run out of wax, don’t worry. Go melt some more and pick up where you left off–your fire starters will be just fine. But they all need to have the lint totally covered by wax. The way these things work is by coating the lint in wax which drags out the combustion of the lint. Straight-up lint with no wax will burn very quickly and serves no purpose for starting a fire. In the same way that wax slows the burn of a piece of rope in a candle, it controls the burn of the lint while not hindering the flame. In other words, if you skimp on the wax, your fire starters will have a shorter burn time. 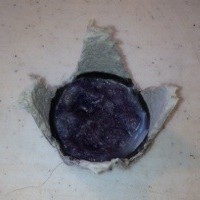 Again, patience is the name of the game while you wait for the wax to completely cure. I let mine sit for about 50 minutes before they seemed to be cured enough to work with. To be honest, they could have gone another 30 minutes, maybe another hour. You don’t want to start working with these and find a pocket of liquid wax hidden inside. Once they’re cured, take a pair of scissors and cut along the imaginary lines between each carton spot. It will effectively make each spot square when viewed from above.

That’s it! You’re done. I’ve seen some other folks go even further and fold the cardboard flaps over, some others even wrap dental floss around it after folding the flaps in. I don’t think that’s all necessary. Leave the flaps sticking up to act as a lighting wick and go try one out…

I got a burn time of approximately 12 minutes on my first try. There was a good breeze blowing and I used no wind screen, so I don’t know if that cut into the burn time or not. Here’s a video of the burn in action:

As I mentioned earlier, I think adding more dryer lint would increase the burn time by giving it more fuel. Also, a little more wax might help too. Overall, I’m very pleased with the result! It lit very easily with one match in breezy conditions and never went out. The flame was fairly large and well-sustained. All that was left was a charred pile of cardboard and lint which would easily be consumed in whatever fire you were trying to start (i.e. a camp fire or stove).

A few more pics of the test burn… 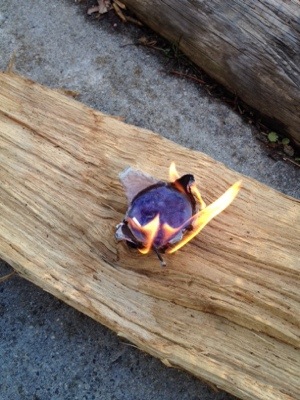 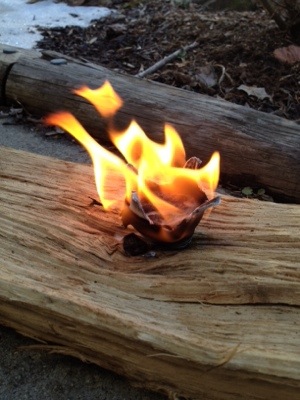 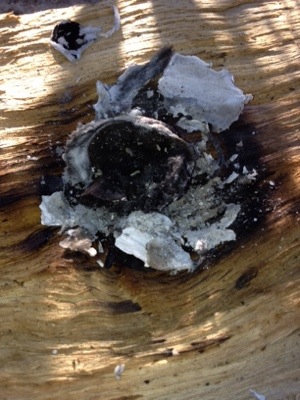 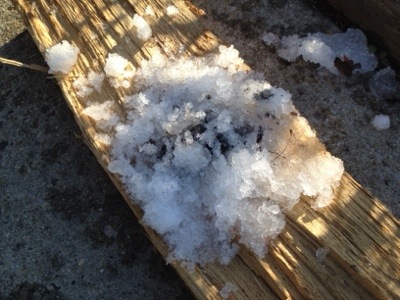 A few final thoughts on the potential uses for these things…

I intend to use these primarily as a starter for my Solo Stove backpacking camp stove. They’re lightweight, compact, and cheap. Three of the main ingredients for my backpacking adventures. They’ll also see use at the frontcountry (or car camping) fire pit. I might even try them out in the fireplace at home. It beats paying for factory-made versions of the same thing. I might also try using sawdust the next time I make a pile in the garage. The pre-made ones I used to buy at the outdoors store were essentially just a little half-dome of sawdust caked together with a light coating of wax. Maybe I’ll do a comparison of the two and post it up here when I get around to it. Until then, let me know if you’ve got any suggestions or alterations you’ve tried.