To make it easier to read through my FBI Citizens’ Academy posts, I figured it might be useful to give all of the posts one all-inclusive summary and a short re-cap of the program. Plus, they gave us a CD full of pics from the class from some of the highlight moments and I thought they’d be worth sharing here too.

I’ll start with the eye candy. This is very brief selection of the hundreds of pics they gave us on graduation night on a CD. Click each thumbnail to view a larger version and click your browser’s back button to return here. All pictures are courtesy of the FBI Charlotte Division. 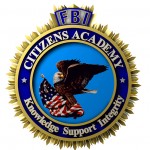 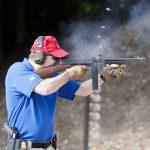 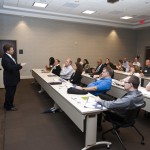 Special Agent in Charge Briese welcomes Class 12 on the opening night of the 2012 FBI Charlotte Citizens’ Academy. This is the classroom where we spent most of our time listening to presentations on each of the topics. 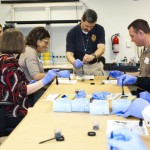 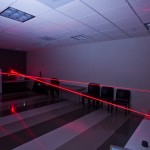 Lasers retrace simulated bullet trajectories on Evidence Response Team (ERT) night. This shot demonstrates how the trajectory (or path) of a bullet is documented at a crime scene. 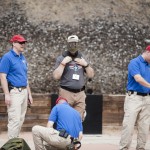 Me gearing up for the simunition experience on range day. Simunitions are basically miniature paintballs that are fired by a small gunpowder charge. The shot velocities are reported in the 400 fps range, so protective gear is a must. 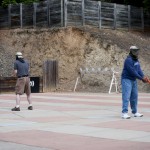 Me and another class participant about to duel in the simunition demonstration. Starting back-to-back, a countdown from three was given… 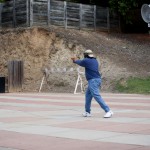 Action began as soon as the instructor reached zero. I opted to bolt right and turn to give a harder target to hit. 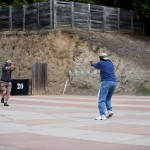 Fully engaged in trying to stop my target. I landed one solid hit (out of only 5 rounds allowed), and I think one graze shot. I’m blaming it all on the inaccuracy of the gun! 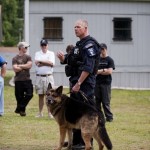 A CMPD officer demonstrates a police dog on range day at CMPD’s training facility. An FBI bomb dog was not available, so we got a presentation on a drug-sniffing dog. This particular dog was a few short days away from permanent retirement after serving a long career as a police dog. 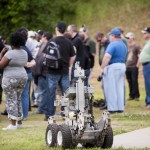 The FBI bomb squad presentation on range day included a demonstration of a robot, inert examples of improvised bombs, and an actual detonation of two types of bomb material (TNT and C4). 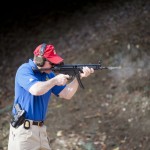 An FBI firearms instructor shows us how an MP5 works on full auto. 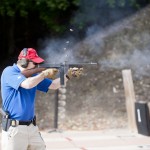 An FBI firearms instructor shows us a Thompson sub-machine gun on full auto. This particular gun is one of four that the Charlotte Division keeps in its vault. Estimated at about $240,000, they are extremely rare given their infamous history as actual FBI guns from the early and mid 1900’s. 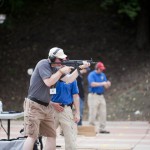 My turn running the MP5 on full auto on range day. 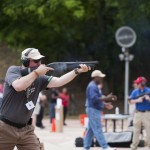 Me running the Remington 870 short barrel.

Range day was what started all of this for me. I heard about the Academy through a fellow gun enthusiast, and going into it, all I wanted to do was play with the FBI’s toys! Little did I know (or really expect) that it would offer much more and certainly educate me on many levels. In fact, range day was just a small piece of it all.

The Special Agent in Charge (basically the head honcho of all FBI operations in NC) asked me one evening what was my favorite demonstration. I stumbled in trying to think of something and just blurted out “range day!” like the little boy that I sometimes am. In retrospect, and in answering other folks’ questions, I can conjure up a better response. I’d have to say the polygraph examination was the most interesting and most enlightening. I went into it thinking it was primarily a bunch of hocus-pocus Hollywood “science,” but I not only have a strong respect for a proper polygraph, I learned a heck of a lot about it–and if there’s anything I like most, it’s learning all the details about stuff to bore the heck out of people later on with!

Conversely, I had a least-favorite night too. Given the combined feeling of disgust/rage and hopelessness, the night of cyber crime (which was predominately child porn) and gangs was a low point. I certainly walked away from it with a ton of new knowledge and I’m grateful for that, but at the same time, that new knowledge bums me out big time. I’m glad there’s a force that is trying to counteract those bad things that exist in our society (far more than you may imagine), but I have to say I got the impression that we’re not nearly doing enough to prevent them. It’s no fault of the FBI’s. Like anything and everything else in the world, it simply costs money and resources to deal with. Since the FBI is tasked with handling dozens of other crimes too, there’s only so much money and resource to go around.

I have to say that I think the FBI’s intent of offering the Citizens’ Academy worked on me. Public outreach is the agency’s main goal with all of this; to spread the good word of what the FBI actually does and does not do. In my honest opinion, I feel like we were given an accurate portrayal of the FBI’s role and responsibility. I think they addressed everyone’s wondering (some others’ suspicion) about whether or not they ‘spy” on American citizens (ones not known to be engaged in illegal activities), particularly by using the USA PATRIOT Act.

The most-frequent question I get from everyone about the Academy is “what do I get from it?” Specifically, they wonder if I have some special arrest powers or at least a direct line to the FBI. I hate to burst everyone’s bubble, but I don’t have any of that. The Citizens’ Academy does not allow one to bypass the regular FBI Academy. It might give you one tiny point ahead of the next person if you happen to apply for Special Agent selection, but it gives you nothing more that a better understanding of the Agency and the knowledge that will hopefully help the FBI dispel rumors. I had a great time and learned a heck of a lot, plus, I put some lead downrange on the gub’ment’s dime! Can’t ask for much more than that!

I highly recommend attending a Citizens’ Academy near you. Find a division near you (pretty much every large city in the US has one) and find their public contact email address. Simply inquire like I did and get put on their notification list for the next class offered. If you have any amount of engagement with the general public (meaning you’re not a hermit who never talks with anyone outside your own home), you should be able to meet the selection requirements.

Here are all of my weekly accounts from the entire class semester:

One thought on “FBI Citizens’ Academy Re-Cap and Pics”