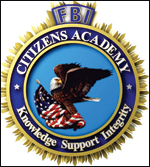 This past week’s session started with an FBI attorney giving a quick briefing and facts vs. myths of the USA PATRIOT Act. Very interesting and a pretty good idea on the FBI’s part to try to debunk a lot of myth floating around this most evil-bad of evil things (sarcasm there). The presenter was an Agent who was the lead legal counsel for NC FBI activities (not the only counsel, but the main guy). He was very direct and willing to entertain “what if” questions as well as give some quasi-real life examples to try and adapt the legal-ese mumbo jumbo into laymen’s terms.

The first piece of fun fact trivia was the actual long name of the USA PATRIOT Act: Uniting and Strengthening America by Providing Appropriate Tools Required to Intercept and Obstruct Terrorism…or something very close to that. I never knew the actual title, so maybe someone will learn something here too.

The Agent described the intent of the Act as a means to do two things:
1. Make it easier to investigate and prosecute terrorists.
2. Make it easier (even possible in a lot of cases) to share information both ways between criminal and terrorism cases.

Before the Act, terrorism cases had their own very unique set of laws and rules to handle them. Nearly everything was required to be handled different from criminal cases which in nearly all cases severely hindered terrorism cases. It was set up to be very reactive instead of proactive. Search warrants and electronic surveillance warrants were very slow in obtaining them (matters of several days to weeks). Worse yet, warrants were antiquainted in terms of being stuck to one specific jurisdiction or one specific electronic device–not good when the enemy is very mobile and is savvy enough to know the rules we’re playing by and change devices frequently (i.e. cell phones).

The Agent made it very clear that the Act doesn’t allow for unchecked use at the Agents’ will for monitoring and/or surveilling. They still need to jump through all the legal hoops of proving why the requested action is warranted and it still goes through many levels of local, regional, and high level review. Approvals also always expire–there is no such thing as an indefinite warrant. It can certainly be renewed, but it must be proven that the actions have been fruitful and relative to the case…not just a bunch of listening in on someone’s dirty phone calls to a mistress!

In addition to making it less-bureaucratic for investigating and prosecuting terrorism, the Act also made it easier (and in some cases even possible) for two-way communication between agencies–both internally and externally. There used to be many “walls” that made it very difficult and in some cases impossible to share info not only between federal agencies, but even internally between the FBI’s own Agents. The Act broke down many of these walls and made it possible for someone working a terrorism case who stumbles upon evidence that may be beneficial to a criminal investigation to share that info with those investigators, and vice-versa.

In all, I thought the presentation was exactly what this class needs: a to-the-point fact vs. myth type of presentation on a relatively hot topic among the common Joe citizen. If you thought the conspiracy nut was going crazy during this presentation with questions, you’re correct. I can’t recall any specifics, but the Agent took the questions like a champ and didn’t “lawyer” out from under them with responses like “I can’t comment on that because I’m not familiar with it” or other ambiguous answers.

The Agent did say that the Act takes a lot of understanding to get the full grasp of it and how they, as an Agency, can use it. It’s not a simple checklist of can’s and can’ts. It’s a bill that’s been blown far out of proportion mainly with what it’s not, and that’s where I wish they’d do a better community outreach at explaining things…much like they did for our class. To my knowledge, there is no official FBI site with this myth vs. fact type of discussion. I know most wouldn’t trust it anyway, but if there’s one thing I’ve taken away from all the presentations it’s that they’re very understaffed in relation to the number of crimes and cases they have. The Agent even said “we don’t have time to be as intrusive as some folks think we are with this Act.” Manifests are not kept (not allowed to be kept) on folks who are not involved in cases. “Roving wiretaps” is the name given to a wiretap on a cellphone that is allowed to follow one specific person. As I mentioned before, old ways of business required a new warrant with each new phone a bad guy obtained. When this happened on a dialy basis, it was not only cumbersome for Agents, but it was severely hindering their ability to investigate the bad guys.

To put my belief out there in the open, I’m pretty confident that it is not a “spy on Americans” bill that some folks would like to believe. It was also explicitly described as a tool for fighting terrorism, not policing citizens. One could say “well all they have to do is toss you into the category of ‘suspected terrorist’ to use it on you.” Since I’ve already had the presentation on terrorism, I’d say that it would be unethical for the FBI to do so without the proper evidence. Remember, at the end of the day they have to make a case against you. Otherwise, they’re just spinning their wheels in the mud. I fully believe the Agent when he said they simply don’t have time to go poking and prodding everyone in America with intrusive wiretaps and surveillance. The numbers make sense to me. There are far too many real bad guys out there to keep the FBI occupied. I think Hollywood and the media (from both sides) combined with our own wild imaginations have done the vast majority of this hyping.

The case of US vs. Jones (about attaching GPS devices discretely to vehicles) did come up. The FBI is very disheartened with the recent ruling about GPS tracking needing a warrant. Their former practice was that it was not something that needed a warrant (which was upheld in Circuit Court)…as long as it was not intrusive to the vehicle itself. Some tracking devices used long term do need to be wired into the vehicle’s electrical system for juice. That does require a warrant (always has). The old way of thinking was based on your location not being a private matter. If they had an Agent with eyes on you, it was 100% legal and did not (still does not) require a warrant. The same was applied to the GPD tracker. Now, the Supreme Court has ruled that it does indeed invoke a “search” and needs a warrant. No more slapping a GPS device on a car when needed. They were admittedly very bummed about this ruling and believe it will hamper investigations.

After the presentation on the USA PATRIOT Act, he gave a quick rundown of the FBI’s deadly force policy. It says what all state laws basically say and enable the common citizen to use deadly force. If the Agent believes there is the potential for death or great bodily harm to himself or anyone else, force is authorized. Plain and simple. They emphasized that each Agent is responsible for their own decision. No one can tell them to shoot (or not to shoot). If you can articulate the reasoning for the shot and it meets the requirement, you’re safe. Much emphasis was placed on how much decision making must be done in an extremely short amount of time that is dictated by the bad guy. It was subtle (and in my opinion, warranted) defense of Agents’ actions by making it a point to illustrate that the bad guys always have the advantage in these situations because they don’t care about doing right–whereas the Agent (or any LEO) has the weight of the country’s reaction riding on them everytime.

From the presentations, we moved to hands-on training with the Firearm Training Simulator (FATS). I had great expectations for this. Time to show my skillz (“z” added to show sarcasm). The point of this simulator is to present LEO’s with shoot or no shoot scenarios. It consists of a large projection screen, a projector, an “eye” to watch for laser impacts, and a modified Glock fitted with a laser in the barrel and a CO2 cartridge rigged to cycle the slide and provide some amount of recoil (less than a 9mm). The instructor pre-selects the video sequence to present specific scenarios which range from not only different types of agencies (border patrol, DEA, local PD, etc.) but different environments and encounters. The scenarios we saw in the class ranged from a suspected hooker at a truck stop to kids on a playground who found a gun. Each case tries to throw something unique at you and maybe even try to catch you off guard. For instance, your attention is set on the hooker and the truck driver when all of a sudden the angry boyfriend/pimp walks out from behind the truck…now you’ve got three people to deal with. The kids freak out and wave the gun around innocently which is trying to make you decide whether it was a threat or not. My scenario was a response to a burglar alarm at a business. As soon as you show up, you hear gunshots. Walking around the corner of the building, you see your partner laid out on the ground with someone hovering over him, which quickly turns into the person pulling a gun and firing at you. I had a pretty good idea that my scenario was going to turn south quickly when I heard the shots, so I was ready to unload. The downside of the simulator is that it’s not perfect and doesn’t always register the shot. Worse, it seems to be a little bit inaccurate in reporting where your shot hit and whether it was lethal or not. I unloaded about 8 rounds because the threat kept coming at me. Maybe half of them registered and the computer says that none of them were hits. I call baloney!

While the simulator may have its faults in terms of accuracy, it did serve its purpose in putting you in a quick decision environment. If you didn’t react, yes, you “died” according to the computer. I couldn’t help but think that we’ve got things like XBox and Playstation these days with motion capture technology…why can’t they adapt that to these sims so our LEO’s can be better trained. They say there are much better simulators out there (mainly DHS has the money to purchase them), but they’re too pricey.

Due to time constraints, things were moved along expeditiously which has a downfall of not introducing everyone to firearms as thoroughly as I’d like to have seen. Most of the people there had never seen a real gun, let alone held one. While it was just simply “laser tag” we were doing, it was still a firearms simulation. The Agent did go over the cardinal rules of gun safety, but they weren’t always enforced as well as they could have been. Obviously there was no true safety concern in the simulator, but I was worried about the disregard carrying over to the “real” range day. But worse yet, I fear that some folks didn’t get as good of a “break in” session as they should have. You could read the fear and/or confusion on some folks’ faces when the gun was given to them. For the most part, everyone seemed to have a good time and it didn’t end up scaring anyone off from the range day.