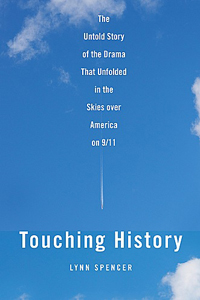 The folks at Blackfive have supplied me with a few good book recommendations over the past couple of years or more starting with this one: Touching History by Lynn Spencer. The subtitle/tagline pretty much clues you in 100% as to what the book is about: “The Untold Story of the Drama That Unfolded in the Skies Over America on 9/11.” As someone who thought they had a good idea of what and how things went down on that infamous (and sadly, nearly forgotten) day, this book really opened my eyes to a relatively unknown story of the controlled chaos that happened above our heads.

We all remember when America’s skies “closed” for business on 9/11. We saw the news footage of planes backing up on tarmac’s (airport driveways for the aero-uninclined), passengers stranded and sleeping in airports, and even a few reports and sightings of military aircraft screaming across the skies. What the vast majority of us didn’t see and likely know nothing about is the chaotic improvised choreography that happened to make it all happen safely–that is of course after those in charge snapped out of the initial shock and disbelief that there was an unorthodox hijacking taking place, let alone multiple ones happening at the same time.

The author, Lynn Spencer, is a commercial airline pilot herself who set out over the course of three years interviewing those directly involved (military personnel, pilots, and ground controllers namely), listening to recorded transmissions between aircraft and controllers, and sifting through available documents to try to piece together an account of what went down and how–one that the average person can follow. A detailed and thorough recreation of those events is the result of her efforts; which leads me right into the crux of my personal take of the book and the events…

The book itself teeters on the brink of chaos (for me as the reader) due to no other reason than it so precisely accounts for an extremely chaotic event. The content is constantly bouncing between different aircraft (the conversations between pilot and co-pilot), different controller-aircraft conversations, different military asset responses, and different time periods of that fateful day. It sounds confusing but it was a necessary style to use to account for so much that was happening simultaneously–much of it at the exact same moment. But this controlled deluge of information being presented to the reader speaks volumes to the fact that the author was able to pull it all together and not lose the reader. In fact, for me, it helped give a sense of the craziness of the events and what those involved were experiencing.

There’s a lot in this book that most people have no clue happened. Some folks, like myself, may have known some vague idea about it, but their knowledge stops there. Touching History fills a lot of gaps and enlightens in that sense. A reader will very likely find themselves in a combination of disbelief, astonishment, and fascination throughout reading the book. It certainly provides a ton of “did you know” material for conversations. From documenting other confirmed planes that were to hijacked and made part of the tragedy that day to the surprising inability of the government to react to the never-before-seen situation (and the resulting quick decisiveness of those in positions to make things happen), readers will find no shortage of intriguing info to keep them page turning.

Some links related to this book: